Simon has spent his entire life with strong family connections to the Buderim Community. He is well known for his passion for Buderim, its history, its people and its future. This passion and his belief in the value of volunteering and philanthropy have driven Simon. He has been continuously involved in The Buderim Foundation since inception in 2004.

Simon is particularly interested in the marketing and fund development area of The Foundation’s operations, and plays a key role in growing the community’s sense of ownership in the Foundation. He also has an interest in encouraging other Queensland communities to consider the community foundation model.

Simon was awarded an OAM for service to the community in 2003. 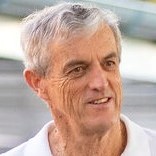